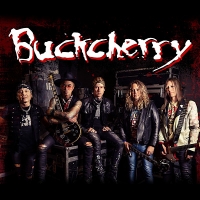 Joining the already busy autumn schedule, certainly as far as rock gigs and tours go, is the latest UK and Ireland visit from Californian outfit Buckcherry. The Grammy-nominated band have recently issued the follow-up to their 2010 Top 75 album, "All Night Long", in the shape of "Confessions".

Although the album hasn't bothered our chart-compilers yet, recent single "Greed" has notched up only the band's second Top 20 single success in the U.S., a feat that may signify bigger things over here.

What is big is their next UK tour - accompanied by the Swedish hard-rockin' band Hardcore Superstar, the tour will visit several towns including Coventry, Manchester, Belfast and many more throughout November and December (on sale now).

Added to the tour just now are two even-bigger shows including one in the capital. Camden's KOKO will host the opening night of the tour on 22nd November, while Glasgow's O2 ABC will present the two bands on the 26th.

Tickets for London and Glasgow are on sale now, priced at £17.50 upwards.