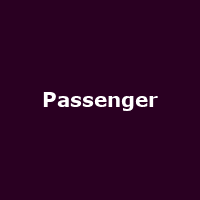 From around a decade ago, the Brighton and Hove band Passenger quietly performed loads of shows, locally and nationally, before finally getting an album, "Wicked Man's Rest", issued in 2007. They nearly got a hit out of it - the single "Walk You Home" managed to stall at #134 and then, boom, within a couple of years, the band's members had disbanded.

Passenger the group became Passenger the solo performer in 2009 when songwriter Mike Rosenberg opted to keep the alter-ego for himself and issue the first of a handful of albums, including the debut "Wide Eyes Blind Love". Within four years, Rosenberg now finds himself remarking on Twitter that his huge hit "Let Her Go" has sound-tracked snippets of Hollyoaks and, er, TOWIE. That's when you've really made it.

His Sheeran-esque and Tom McRae-like delivery seems to have struck a chord with just about everyone who likes simple strumalongs, to the point where most have gone on to check out his 2012 album "All The Little Lights", from where "Let Her Go" was originally lifted. It's currently sitting either side of Rod Stewart and Rudimental on the albums chart - nice going, Mike.

Later this year, after performing at Hard Rock Calling on Springsteen Sunday (30th June - there are some tickets available), Passenger will nip over to Cork for a show at the Marquee, before returning to Ireland and the UK for a proper autumnal jaunt.

Stops on his tour include Bristol on 4th October, then Dublin (twice), Belfast (in between the two Dublin shows), Nottingham and many more until ending up in Shepherd's Bush on 18th October.

Tickets are on sale now, priced from £13 upwards.