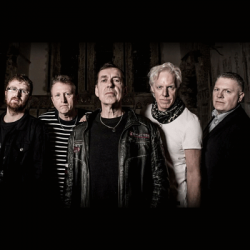 Thirty years ago, the late Stuart Adamson unleashed a rallying cry from the radio that went something like "Who saw the fences falling/who broke the ploughman's bread?". In less capable hands, lyrics such as these would have appeared mawkish and irksome but Big Country proved that traditional stories, particularly from north of the border, could rock.

"Harvest Home", their first single issued in 1983, is still a crowd favourite, as indeed is pretty much their entire catalogue. From "In a Big Country" and the debut-album "The Crossing", past "Look Away" and "The Seer" to 2013's "The Journey" album, that trademark resolute sound with e-bow 'bagpipe' effects has lived on through three decades. Despite Adamson's sad demise in 2001, Mike Peters has ably filled in on vocals while even-newer bassist Derek Forbes has brought his thunder-thumbs from Simple Minds with aplomb.

To celebrate the journey to, er, "The Journey", Big Country will embark on, um, a very long journey in the shape of a tour. But, not just any old tour - this is the Land's End to John O'Groats Tour!

Taking in the far corners of the UK and including towns not normally included in any band's touring schedule, the jaunt will take place in the autumn and last for a month. Although it's not quite in the 'right' order as the tour-name suggests, Big Country have picked some cracking places to play.

Shetland is the first stop on 12th October, followed by Thurso on mainland Scotland on the 18th (a wise six day gap between the two), then Dunfermline, York and many more across central England and the south, including the nearest to Land's End they could get, Falmouth on 30th October. The tour is currently set to wind up in Grimsby on 9th November.

Tickets are on sale now, priced from £20 upwards. More dates may be added in due course.