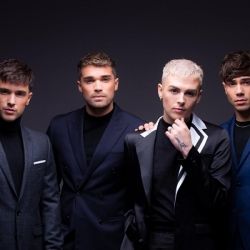 Love it or hate it, X Factor has kept lots of kids off the streets and interested in music which might be a good thing.

Despite not winning last year's hard-fought battle, with finalists that included Lucy Spraggan, Jahmene Douglas and eventual winner James Arthur, boy-band Union J haven't done too badly out of it. Aside from the usual hype, build-up and adulation that goes with being on the show, they've been catapulted from the streets and into the charts - their debut-single "Carry You" recently hit #6 in the Top 100 Singles Chart .

Not that the charts count for much these days - it's bums on seats and feet on floors that carve out a career (or not), as well as potentially lucrative long-term projects such as albums and TV slots. And talking of albums, Union J's debut opus is set for release later this year, possibly in time for the Christmas market.

The Festive season will also bring Union J to your town, live, in person. The tour, another 'first' for the band and entitled Magazines and TV Screens, will kick off in Oxford on 14th December, followed by several shows ranging from Cardiff to Glasgow, Plymouth to Manchester and Brighton to Ipswich, with two Hammersmith shows confirmed for 23rd December (including a matinee), Birmingham, then across the Irish sea to Belfast and finally Dublin on 14th January 2014.

Tickets are on sale now, priced at £22.50 to £29.50, depending on town. Support will be announced in due course but regardless, these shows will sell pretty fast.

You can also catch the chaps performing at any one of many pop festivals during the summer, including Sound Island Music Festival 2013 and Junction 16 2013.