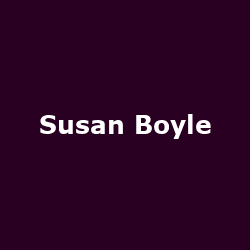 Susan Boyle has come a long way since that night in 2009 where she finished as runner-up to Diversity on Britain's Got Talent. In fact, both acts have come a log way, with Diversity regularly touring and selling-out arenas across the UK and Europe.

Well, now it's the turn of the multi-platinum-selling singer from a small region of Scotland. Not for her arenas or even a full UK tour. Oh no. Scotland is the host and concert halls are the venue of choice. 'Susan Boyle in Concert' will feature songs from her hit albums plus a few classics and surprises. Expect: 'I Dreamed A Dream', 'Wild Horses', 'Somewhere Over the Rainbow' to feature. The shows follow her cameo appearances in the 2012 musical show I Dreamed a Dream - a show which told Susan's life story.

The Scottish tour commences on 2nd July at the Empire Theatre (Eden Court) in Inverness, moving on to Aberdeen's Music Hall, Caird Hall in Dundee, then two nights in Glasgow at the King's Theatre and finally (for now) two nights at the Festival Theatre in Edinburgh.