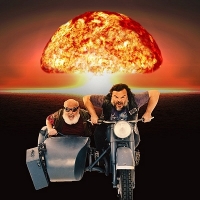 After a considerable gap between albums, 2012 saw Black and Gass regroup Tenacious D for a swath of successful sell-out shows across the UK, not only in the summer but also in the autumn. Their biggest romp was at Download 2012, culminating in more headline shows soon afterwards.

Although 2013 has been relatively quiet in comparison, the last album "Rize of the Fenix" and accompanying EP "Jazz" have continued to generate considerable interest across the globe, reaching the Top 10 in eight territories and heralding a considerable improvement in fortunes compared to 2006's "The Pick of Destiny".

With the latest album a huge success here (#2 is not to be sneezed at), Tenacious D have lined-up some more live shows for the UK and Ireland, starting with Bournemouth on 7th December, followed by two shows in Shepherd's Bush, then Edinburgh, Leeds, Dublin and Birmingham, plus more to be added in due course.

Tickets are on sale now, priced at £35 upwards.

Although the gap between this tour and their last is just 14 months, demand for the duo's shows never seems to wane.