Paul Foot wants to have Words on his 2013 UK tour 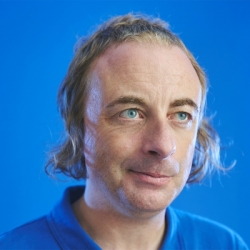 To look at him, you'd expect Paul Foot to unveil a flying 'V' guitar and perform Roxy Music's greatest hits - he's got that Eno thing going on, right? The hair? The jacket? Well, no - apart from both being intelligent beings, Foot is more at home with making people laugh. A lot. Never one to hold back, Paul Foot is something of a comedy genius. He doesn't do jokes or quips - he rants. A lot.

There's ranting inanely and there's ranting with enough characterful nuance to cause onlookers to end up rolling around with laughter at the absurd simplicity of Foot's character. Geeky, pedantic, infuriating and just a little bit eccentric, his many blogs and webcasts have drawn praise and admiration (mainly from his following, The Guild of Connisseurs), especially his 'Michelin-scarred' cooking blogs. In keeping with the spirit of the recent Masterchef competition, we've popped Paul's 'Isle of White' recipe one on this page.

Also on this page are various listings featuring Paul Foot, including his new forthcoming autumn 2013 tour. Entitled 'Words', the jaunt will take place throughout October and November and includes stops in Leeds, Durham, Preston, Exeter, Nottingham and many more until Norwich on 30th November.