Posted: 9th May 2013
Experience their spell-binding spectacular throughout September and October, tickets on sale [10/5/2013 9:00] 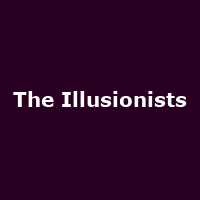 For decades, the allure of magic, trickery and illusion has long since fascinated audiences across the globe. From Harry Houdini to Derren Brown, there's been nothing more exciting than being duped legally by the sleight of hand of a skilled conjuror. For all of the light entertainment value of David Blaine, Paul Daniels and, yes, Tommy Cooper, they remain magicians, illusionists and mentalists of the mind and masters of deception.

Many magicians like cardsman and actor Ricky Jay come as a solo article or, in the case of acclaimed entertainers Penn and Teller, packaged as a duo. Formidable though they are, the days of the variety magic show, starring several performers, seem all but over - until now.

Ladies and gentlemen, we give you The Illusionists. Essentially seven internationally-renowned magicians with the looks and monikers of super-heroes or pantomime villains (or both), the conjuring collective are a combination of all of the aforementioned magicians and then some. Bringing magic into the 21st century is no easy thing - the whole world has become more inquisitive and sceptical in equal measures but, to audiences reaching tens of thousands around the world, The Illusionists seem to be pulling it off in spectacular style.

Their names carry an air of unworldly mystique - there's The Anti-Conjuror who shocks (and looks a bit like he's stepped out of Black Veil Brides or Marilyn Manson's tour-bus), The Escapologist whose speciality is death-defying escapes and the vampish Enchantress who defies gravity with style, grace and a fair bit of pouting. Classic tricks are revisited by The Gentleman while The Trickster provides laughs and magic. The Mentalist and The Inventor are pretty self-explanatory.

No doubt kids will come away with a favourite magician and the inspiration to 'have a go' themselves (probably best to keep the bike chains, matches and Jacuzzi off-limits for a bit).

The Illusionists' first UK visit will take place in the autumn, calling at Blackpool on 27th September, then Edinburgh, Nottingham, Manchester (two shows) and Wolverhampton before heading to London for three shows on 11th and 12th October, with the latter offering up a matinee performance.