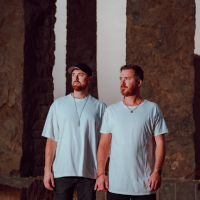 After the recent return of French disco-funksters Daft Punk, it seems only fair and just that another key pairing formed in the '90s should step up to the dub-plate with the announcement of new material and live shows.

Basement Jaxx have already outlined plans for performing at festivals throughout the summer with slots at RockNess, Boardmasters, Belsonic, The Big Feastival, Kendal Calling and V Festival, coupled with an already sold-out London show at Somerset House on 21st July (as part of its Summer Series).

Now they're back, with the release of new single "Back 2 The Wild" and the imminent issue of a full album later in the year. As yet the title is to be fully confirmed, however the untitled album will be their sixth 'proper' studio set and promises to be a huge return to form after 2009's ambitious double offerings "Scars" and "Zephyr". Some of the remixes of "...Wild" suggest they're taking it back to basics - check out the summery house 'n' dub mix provided by Gorgon City - it's a beauty.

Tickets are on sale now, priced from £25 with more dates likely to be announced in due course.