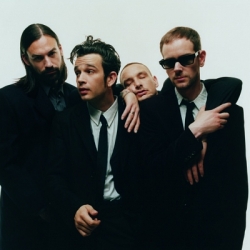 After issuing a handful of singles and EPs since last year, The 1975 are poised to clean up this year with sold-out shows and a bevy of new releases planned for the spring and summer.

Follow up to their first Top 20 single "Chocolate" is the next EP, their fourth cunningly entitled "IV", due for release on 17th May. It features one particular song that has been with them since day one - "The City". Originally forming part of their debut EP "Facedown" and slightly reminiscent of The Big Pink crossed with The Script, the song was first aired in 2012, garnering an audience from Radio 1 and interest in their live shows.

Not surprisingly, The 1975 have a busy 12 months coming up - just about every festival worth its salt has inked a deal with the band to appear on the bill, including Bestival, Leeds, T in the Park, The Great Escape and, for this week, Liverpool's SoundCity and Live at Leeds. Oh and that's not forgetting the small matter of playing to the same crowd that The Rolling Stones are going to assemble in Hyde Park on 13th July.

The Mancs will also headline a few sold-out spring shows afterwards with Stockton being about the only one with remaining tickets (£9.50 - they'll not be around for long!), plus Dot to Dot shows (still available) and two previously-announced headline shows in Manchester and London during September - these have sold out already, aside from a few Premium tickets.

For those that can't make the shows in May, or cannot face festivals, or who missed out on those shows in Manchester and the capital, good news - The 1975 have announced further autumn 2013 concerts and extra action for the north-west and London next year.

Stops in September include Newcastle on the 16th, Birmingham, Nottingham and more until Brighton on the 28th and Dublin on 30th. But that's not all - 2014 will see The 1975 return with a show in Manchester on 8th January and one in Brixton on the 11th.

The band's debut-album should appear later in 2013, title TBC.