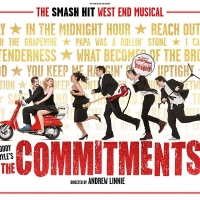 Despite our typical British love of the underdog, we all love a winner. Roddy Doyle's boisterous bittersweet novel-cum-film-cum-stage musical The Commitments fits this bill perfectly, being comprised of a plot about unemployed musicians in a run-down Dublin neighbourhood making good. Using the power of soul-music and good humour, the performers battle against anonymity and their own short-comings, though not always successfully.

As a film, it was a box-office smash and, as a soundtrack album, a best-seller - so, just how will it perform in a theatre? You'll be given the chance to answer that question when Doyle's award-winning story takes to the stage for the very first time in the autumn.

London's West End will host the premiere of The Commitments at the Palace Theatre from 21st September until 26th January 2014 [now extended to October 2014 - Ed]. Directed by award-winning Jamie Lloyd (he worked on the much-lauded recent production of Macbeth with James McAvoy), the story of one Jimmy Rabbitte and his mates trying to hit the big-time will be a sure-fire success when it opens.

Tickets are already on sale and are certain to sell through very quickly - prices to see the 'Saviours of Soul' start from just £5 for 'very high, very steep' balcony seats right up to £31.25 for top price stalls.