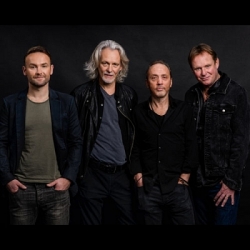 Although the band celebrated 25 years of recording last year with a big gig on home-turf, Glasgow's white-collar soul-pop collective Wet Wet Wet have been in existence as a band since around 1983, making them 30 years young.

Formed of mates who chose music ahead of 'crime, football or dole' the Wets, as they are affectionately known, chose wisely - within a few years, Mercury Records had signed them up and their debut-single "Wishing I Was Lucky" was soon sound-tracking the general public's daily routines by way of Radio 1 etc. The parent-album "Popped In Souled Out" encapsulated their sound perfectly and shipped enough to crack the coveted #1 spot on the Album Chart.

In 1988, the band recorded a charity single "With a Little Help from My Friends" as part of a double a-side single for Childline (Billy Bragg occupied the flip) - it became the first of three number 1 singles, the others being "Goodnight Girl" in 1991 and the ubiquitous "Love is All Around" in 1994. Not quite of Bryan Adams' proportions, the latter spent an ear-worming 15 weeks at the top of the Singles Chart.

After another few years of big hit-albums, Wet Wet Wet imploded in 1997 during their "10" tour, before tentatively regrouping some seven years later. During the past decade or so, the band have toured sporadically and singer Marti Pellow has busied himself with acting and solo work - but now it's time for the Wet Wet Wet magic to dazzle their fans once more.

December 2013 will see the band reconvene once more for an extensive UK and Ireland arena jaunt. Entitled the Greatest Hits Tour, that's precisely what you'll get - after all, they've got nearly 30 to choose from!

The first stop is Dublin on 5th December, followed by Belfast, Manchester, Brighton and many more until Glasgow on the 19th. There's a London O2 Arena show in there - 11th December - which is sure to sell out quickly.