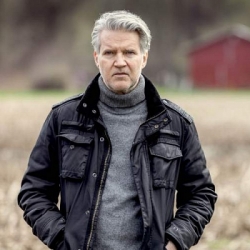 Once upon a time in the '80s, earnest songwriter Lloyd Cole was busy causing commotions with, er, the Commotions. Familiar staples such as "Rattlesnakes", "Lost Weekend", "Brand New Friend", "Forest Fire" and "Perfect Skin" delighted radio-programmers but, on the whole, world-domination was stifled by the general public's nonchalance at such a talented craftsman.

In 1988, after delivering perhaps their most commercially appealing long-player, cheekily-titled "Mainstream", Cole disbanded his Commotions and headed off in a solo direction, notching up a further four Top 40 albums, although less in the way of hit-singles. Consistent and thoughtful, Cole's attraction is, apart from unique vocals, his ability to knock out seriously catchy songs.

His most recent song-based studio album "Broken Record" from 2010 confirms this - high-end quality all the way. And that quality extends beyond straight-ahead route-one pop-songs - his most recent project was "Selected Studies 1", a collaboration with established German ambient-electronic technician and wizard, Hans-Joachim Roedelius, issued on Bureau B.

Sister-label Tapete will issue the next Lloyd Cole 'song' album in the summer - called "Standards", the set was part-funded by fans, part-funded by Tapete and will appear on 24th June.

After its release, Cole will return to the UK for a string of live shows, starting with London's Union Chapel on 17th October and followed by Glasgow (two dates), Wolverhampton, Dublin, Sale, Nottingham and more.

Tickets on sale now, with prices starting from £20 upwards.