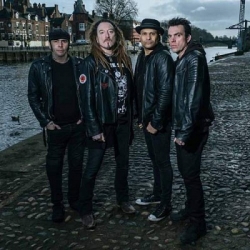 British rockers The Wildhearts have had more reunions than a high school, but are still very much enjoying themselves. Rarely predictable but always good fun, the Newcastle outfit has been enjoying something of a renaissance in recent times, spurred on by the eventuality of being together (or apart) for over two decades.

This year has heralded the twentieth anniversary of landmark debut-album "Earth vs the Wildhearts". Recorded on a budget and released in 1993, its spiky 49 minutes of straight-ahead rock 'n' roll cemented the band's reputation for being relentless, both live and on record. It's not every day in the '90s that you could get away with seeing a single called "Greetings From Shitsville" on lists of forthcoming singles. Or an album called "P.H.U.Q.", for that matter (but, that's another story). Ginger and chums managed to cause red cheeks amongst radio-programmers on both occasions.

"Caffiene Bomb" and "Suckerpunch" earned The Wildhearts their first hits and a subsequent decade of successes and record-company wrangles. But it must have been worth the aggro - the band have been performing tracks from it this year already and are set to do it all again during the run up to the summer!

"Earth vs The Wildhearts" will be performed in full at various shows in June, including Bournemouth, London, Bristol, Leicester, Newcastle and Leeds on the 30th.

Tickets on sale now, priced around £20.