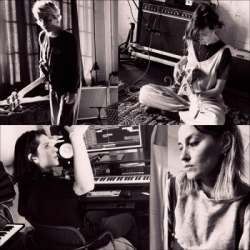 Formed almost 10 years ago, Warpaint have taken longer than many to gain acclaim and garner accolades. Having formed in 2004, it took the US outfit three years to formulate anything as grandiose as an EP, although it was probably worth the wait - they got to work with Red Hot Chilli Peppers' John Frusciante during the process.

Entitled "Exquisite Corpse", the five-tracker was expanded into six songs for a re-issue in 2009, all of which set them on their way to recording a debut-album. Rough Trade dangled a recording contract in front of them and "The Fool" bore its iconic logo and sold by the bucket-load. Universally critically acclaimed, it stalled one place short of being a Top 40 album, still a considerable achievement for a band still not yet accustomed to the attentions of the media.

They'd better get used to it because news of a second-album is simmering, strengthened by the announcement of a UK tour for the autumn. Stops so far include Leeds on 27th October, followed by Glasgow on the 28th, Manchester on the 29th and a final stop in Brixton on 30th October.

Tickets on sale now, priced from around £15. All dates are expected to sell out fast.

The band will also appear at End of the Road Festival 2013 towards the end of the summer at Dorset's Larmer Tree Gardens. Tickets for this are available now, priced at £165 for adult weekenders (Tier 4).