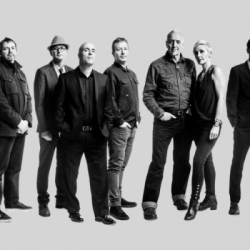 Formerly The Beautiful South, but now minus the descriptive bit of their name, the remaining members of the aforementioned chart-toppers (sans Paul Heaton) have been busy performing live around the country, writing the odd new song and recreating some of their classics such as "You Keep it All In", "Song for Whoever", "Rotterdam" and the #1 smash "A Little Time".

Of course, Heaton penned many of the songs with Dave Rotheray, both of whom have forged solo careers after the demise of the original line-up some five years ago, which left Dave Hemingway and Alison Wheeler to pick up the song-writing baton and run with it.

2012 finally saw the fruits of these labours when "Sweet Refrain" made an appearance in November. Crammed with darkly-observant lyrics and jaunty pop, it's as heady and typically English as the early material, without resorting to rewriting it all. If anything, it's bolder, brasher and even has a bit of riffage going on, here and there. They've clearly got a firm grip on that baton.

To support the album in 2013, The South will be performing shows across the UK with a one-off date confirmed in, er, the south! Southampton is the apt city chosen to kick-start their touring schedule on 17th May and is on sale now from £22.50.

In addition, the band will then tour the UK in the summer/autumn with a show at Gawsworth Hall on 16th August, followed by a string of gigs in Bradford, Cardiff, Newcastle, Norwich and Clitheroe for starters. Tickets are on sale now from around £20.