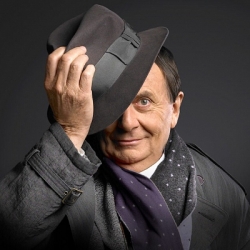 He is internationally renowned for being a woman, his other bawdy alter-ego is a lecherous drunken old sod and his landscape paintings, film productions, scripts and other characters strike a chord on a global scale. Barry Humphries is Australia personified and has probably done more for its tourist industry than the efforts of Qantas, Fosters and Vegemite put together.

As Dame Edna Everage, the grande-dame of innuendo, butterfly glasses and a melange of glitz, glamour and glorious glad-rags, Humphries has been a household name since the '70s, although the character was created as far back as 1956. With her/his rather cheeky verbosity (naughty and nice, never nasty), she/he cut a dash as a chat-show host in the Dame Edna Experience in the '80s, gently mocking guests such as Cliff Richard, Joan Rivers, Roger Moore, Germaine Greer, Dusty Springfield and Jason Donovan.

His other characters include the red-nosed soak Sir Les Patterson and the pale and ghostly Sandy Stone, all hilarious and all highly memorable. However, along with Dame Edna, it really is time to say 'Farewell Possums' as Humphries hangs up his humour hat for the last time.

His farewell tour, entitled "Eat, Pray, Laugh!", will make its way to the UK in the autumn and continue into 2014, starting in Milton Keynes from 23rd to 26th October, followed by Cardiff from 30th October to 2nd November and further residencies up and down the UK until Manchester from 4th to 8th March.

Tickets are on sale now at various prices except for Southampton (on sale Wednesday 27th March) and Norwich (on sale 5th September!).