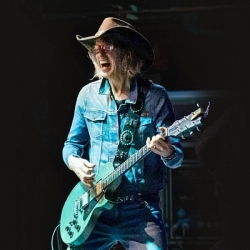 There are classic album shows and then there are classic albums shows. Many have people leaping about in excitement, some a shrug of indifference and a few questioning why such things exist. Having released more than their fair share of stonking albums during the past thirty years, news of The Waterboys touring any one of theirs should raise enough excitement and inspiration to invest in a ticket.

2013 sees the turn of 1988's "Fisherman's Blues", an album that differed from all Waterboys albums before it primarily because it was (whisper it) a folk album. In the eighties, folk was something of a dirty word whereas nowadays audiences will chew their own faces off to get a glimpse of Mumford and Sons or Frank Turner, both comprised of folk influences.

"Fisherman's Blues" followed their best-selling breakthrough album "This is the Sea", with its huge sound and hit-single, "The Whole of the Moon". Out went the heavier guitars and drama, in came fiddles, stories and renditions of traditional songs, reels and jigs that might well have had their record-company scratching its collective forehead. However, rather than becoming a cultural folly, "Fisherman's Blues" transcended expectation and sold very well, spawning a new era in Mike Scott's musical career.

Those days of isolation spent in remote Irish and Scottish communities clearly had a meditative effect on the songwriter - he composed some of his finest songs during this period, many of which remained under wraps until the album's reissue in 2006. From the title-track, past "World Party", "Strange Boat", the sweet "If Ye Go Away" and the epic "And a Bang on the Ear", through to the respectful cover of Van Morrison's "Sweet Thing" and the first of many WB Yeats readings on "The Stolen Child" and Fisherman's Blues" remains a convivial but very personal album and one that sounds incredible live - their Glastonbury 1989 appearance confirms this.

For 2013, the entire album will get a proper outing once again with a (count 'em) 7-CD box-set edition (120-plus songs!) and a live tour to go with it. Stops on the Fisherman's Blues 25th Anniversary tour include Liverpool, Glasgow (2 dates, 2 venues), York, Birmingham, Oxford, Guildford, Bristol, London and Kerry (so far) with all dates due to take place in December.

However for the Hammersmith show on 18th December, we have a pre-sale available right now - see below.