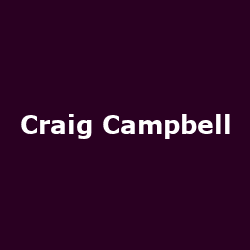 Stand-up comedians with long hair are arguably funnier than those with tidy locks. Discuss. Maybe it's because those blessed in the fuzz department have the advantage of looking slightly more demonic during their act (Ed Byrne, Ross Noble, Billy Connolly, step forward), but none more so than Canadian Craig Campbell who looks like the kind of man you wouldn't approach for a share of his Yorkie bar.

Here is a man who can even make cheese, burst appendix and tourists funny - if you saw him on Russell Howard's Good News a few years ago, you'll know what I mean. Brusque, direct, starey-eyed, a bit sweary - this is what we want from our comedians, not polite apologetic tales about 'a funny thing happened on the way to the theatre this evening'. Now based in the West Country, his experiences of visiting far-off lands makes for ingenious observations and biting wit.

More recently, you may have seen him performing as part of comedic-country outfit The Lumberjacks with fellow Canadian Stewart Francis and Glenn Wool or as support to Frankie Boyle on his last UK tour. You've probably had time to change your underwear from laughing so much - if not, keep 'em on because Campbell is back form a headline tour of his own.

Charmingly entitled his 'Thrilling Mic Hunt' tour, Craig will offload his full-on stories to audiences across the UK during the autumn, including Norwich on 7th November, then Windsor, Chorley, Glasgow and many more until the Bloomsbury Theatre on 3rd December.

Tickets are on sale now, priced at around £15 (some are way cheaper, such as Whitby and Darlington).