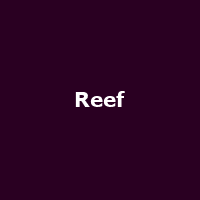 Some twenty years ago, a little known gaggle of musicians from Glastonbury, converged on London, bumped into each other and formed a band. Isn't that how it's supposed to begin? In most group's cases perhaps but, within 18 months, Reef's early track "Naked" was soon being used in 1995 by Sony to sound-track an advert for under-rated mini-discs, the supposed successor to cassettes. Ker-ching.

Unlike the nifty recording medium, Reef have managed to outlast the product and, despite splitting in 2003, reconvened in 2010 after a wilderness period of solo projects, collaborative albums (as Stringer Bessant) and various festival comebacks. In the run-up to their hiatus, they knocked out several hit-singles, including the foreboding signature-tune and funk-rockathon "Place Your Hands", the target of many a jibe for Stringer's milk-curdling vocals and trademark "Awroight-a" hollered throughout the tune.

Whatever criticism was levelled at the band, NME and the like heralded Reef as perfect escapist rock, the like of which also spawned the hits "Come Back Brighter", "Consideration", "Set the Record Straight" and "I've Got Something to Say". Live, they were a formidable alternative to the chin-stroking grungers and clique-ridden drum 'n' bass clubs of the time. Album number two, "Glow" released in 1997, stormed to #1 and earned them one of two silver awards.

To celebrate 20 years in existence, the West Country outfit will show you just how formidable they can still be with a UK tour in November. First stop on the short jaunt is Bristol on the 14th, followed by Glasgow, Birmingham, Manchester, Truro and London on the 20th. [TICKETS: 22/3/2013 9:00], priced from around £18.50.

Beforehand, you can (ahem) place your hands on their Ultimate Box Set album AND see them perform a show on Newquay's Lusty Glaze Beach on 30th May (£19 - on sale now) and CarFest 2013 during August (supporting Ocean Colour Scene and Alfie Boe, no less).