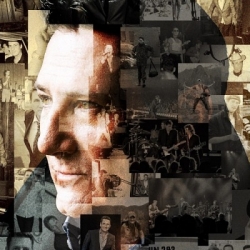 To later generations, Tony Hadley is perhaps best-known for winning the TV talent show Reborn in the USA in 2003 and a contestant on Celebrity Masterchef some years later. But prior to these dalliances outside of his usual comfort zone, Hadley was responsible for cooking up a string of massive hit-single in the '80s with New-Romantics-turned-stadium-filling Spandau Ballet.

With a unique voice that some described (a little unfairly) as a synth-pop foghorn, Hadley's vocal power took his band around the world. They were one of the most successful bands of the decade, from the early days of influential club The Blitz to the later mid-decade era of arenas. Musically chameleon-like, they flirted with Bowie and Ultravox influences on the 1981 debut-album "Journeys to Glory", featuring the hits "To Cut a Long Story Short" and "The Freeze", courted smoother soul influences on "True" and "Instinction" and dabbled with war on "Through the Barricades".

After a disappointing sixth album, "Heart Like a Sky", appeared in 1989 to public indifference, the band folded, with the Kemp brothers, Martin and Gary, heading off to the world of acting and Hadley going solo with mixed success. After almost twenty years apart, Spandau Ballet reconvened in 2009 with a Top 10 album "Once More" and a successful live tour.

Although it seems unlikely that Spandau Ballet will reform again anytime soon, singer Tony Hadley has unveiled plans for a special clutch of shows in 2013. Teaming up with arranger Anne Dudley (she of Art of Noise fame and composer of film soundtracks), the man behind some of the Eighties' biggest tracks will be performing them with a full orchestra at large concert halls in selected cities.

Taking place in the autumn, his chosen venues are Manchester's Bridgewater Hall on 13th October, Birmingham's Symphony Hall on the 15th and London's Royal Albert Hall on the 16th. Tickets on sale now.

As well as these exclusive headliners, Tony will also be appearing at various festivals including Let's Rock The Moor, Epsom Live, Rewind Scotland, Lytham Proms and Flashback.