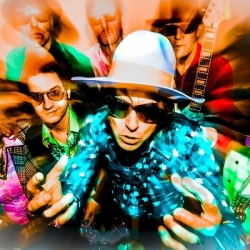 To celebrate their next single release, as well as to reaffirm their rightful place at the top of 'hardest working live bands in Britain' chart (unofficially, but it's probably true), The Jim Jones Revue have announced a quartet of intimate shows at one of London's key intimate venues.

Born out of East London, ex-Thee Hypnotics singer Jim Jones and his merry band of garage-rockin' troopers have been giving audiences a healthy dose of LOUD steam-punk-cum-blues-rock since the tail-end of the last decade, releasing their first acclaimed album in 2008. Taking a blueprint of MC5, The Stooges, The Birthday Party and Thee Hypnotics, The JJR have been converting their influences into a cauldron of incessant molten rock and roll that appears to have been catching on around Europe.

After selling out the Electric Ballroom on their most recent UK tour, the band want to return to their roots for four exclusive and small-capacity shows in Hackney, their spiritual home.

Called the Sebright Sessions and taking place from 8th to 11th May, each show will feature your heroes performing as headliners with a string of special guests and DJs for each night.

Band of Skulls' Emma Richardson will join in the fun on the first night (Wednesday), with Douglas Hart DJ-ing (Jesus and Mary Chain co-founder) and John J Presley supporting. Other guests include Hollie Cook and Rotten Hill Gang (Saturday) with more to be announced for Thursday and Friday in due course.

Tickets are on sale now for all four shows, priced at £15. We imagine that all four will sell out quickly because the venue has a capacity of 150 - and there are probably that many fans living in the band's own street alone!

The new single "7 Times Around The Sun" will be issued on 7th May, just a day before these Sessions get started.