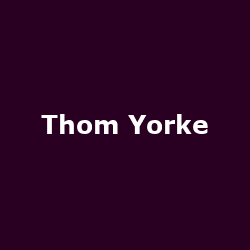 With no new Radiohead material looming anytime soon, Thom Yorke's attentions are currently being diverted by a considerable side-project. In fact, to call Atoms for Peace a 'side' project does it an injustice - it's a band by any other term, or even a super-group drawing musicians from other outfits.

Musically, AFP's debut-album, "Amok", isn't dissimilar to "The Eraser", featuring a fusion of skittering electro-beats, chattering minimal synths, Flea's trademark malleable bass-lines and woe-filled melancholia courtesy of Thom's tormented tonsils. Recent single "Default" and new video "Ingenue" are prime examples of what to expect. So how will it all translate live?

In July, you'll get a chance to find out - Atoms for Peace will appear at Camden's Roundhouse for three shows from 24th to 26th July inclusive, as part of a European tour. Tickets on sale now, priced from (cough) £49.50.

You can expect excerpts from Yorke's catalogue, as well as AFP, although the onus will be on performing the new album.