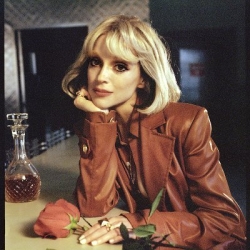 Last year's albums-of-the-year lists in magazines and blogs were crammed with predictable indie-boys and girlie-singers a-plenty, yet just occasionally there were a few chinks of light amongst the dulldom.

On paper, "Love This Giant" from Talking Heads supremo David Byrne, kooky singer Annie Clark aka St. Vincent and a whole lot of brass band performers, shouldn't have worked as well as it did. Or rather, does. In practice, it's a riot - from its prosthetically-enhanced sleeve-image, to the trademark idiosyncrasies of both songwriters, the quirky eccentric worlds of both Byrne and Clark have collided in a melee of funky parps, pretty tunes (from she), descriptive narrative (from he) and sweet harmonies (from they). Mutual artistic admiration rarely creates such vivid interplay.

You can imagine that this formula might work well when delivered live - and you'd be right. Already performed in the States, both on stage and on various TV shows, and in Australia, "Love This Giant" is begging to be, well, loved in the UK - and there's a good chance that it will.

In late summer, David Byrne and St Vincent will bring their intriguing mix of sassy tunes, as well as their brass-wielding team-mates, to the UK for a handful of shows. The first stop is London's Roundhouse on 27th August, followed by Birmingham on 28th and Glasgow on the 29th, finished off with a slot at Salisbury's End of the Road Festival on 30th August.

Tickets for Glasgow are now on sale. Tickets for London and Birmingham on sale now.

Have a watch of the video for catchy album-opener "Who" (above) - don't try that dancing at home.