Josh Groban announces All That Echoes 2013 UK and Ireland Tour 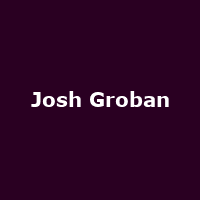 One listen to Josh Groban's recent pre-Christmas song "Brave" almost encapsulates everything you need to know about the award-gathering singer. He doesn't quite fit in pop circles, nor in with straight classical vocalists, rather Groban is sort of Il Divo meets Westlife meets Keane - a big strong voice with mellow balladry and a nod to stadium-pop behind it, that's when he's not covering the likes of Jimmy Webb, Stevie Wonder and, er, Nick Cave (he covered "Straight to You" for 2010's "Illuminations").

To his credit, Groban writes most of his songs and isn't shy of appearing at huge galas or in our album charts, for that matter - that last 2010 album scored him a Top 30 placing here (#4 in the States). He remains one of the few modern artists to score a #1 hit with a Christmas album (2007's "Noel") and, when he's not making the festive season jolly, he frequently helps charitable organizations including his own Josh Groban Foundation.

All of which stands him in good stead for album number six and the accompanying tour. "All That Echoes" finally got a UK release this week, a timely reminder that Groban is back and vying for a large audience in the summer.