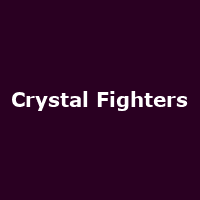 My, there have been a lot of bands with "Crystal" in their name: Bats, Castles, Stilts and Antlers have all blessed their talents with a moniker suggesting pure unadulterated quality.

Crystal Fighters actually chose opera rather than cut-glass as their inspiration - named after a Spanish opera written by member Laure Stockley's grandfather, the Basque-inspired piece isn't the only part of the band's make-up associated with the Spanish region. Much of their earlier material has featured various Basque instruments such as a danbolin (snare drum hybrid) and txistu (pipe-whistle), as well as the usual you'd expect.

With such a unique template, it's hardly surprising that Crystal Fighters' fanbase has grown somewhat, especially after the wide-screen debut-album "Star of Love" (issued in 2010 and then in remixed form last year) and the Zane Lowe Hottest Record of the Week in the autumn, "Love is All I Got". Now they're back in 2013 with more new material and some shows.

On 23rd May at KOKO in Camden, Crystal Fighters will be airing songs from their next album, as yet untitled, including "Wave", a track that appeared as a teaser on their website recently. Tickets for this gig are now sold out. Later this year, however, the band are setting their sights on a bigger jaunt, starting with Brighton on 21st November, then Brixton, Manchester, Leeds, Newcastle and finally (for now) Liverpool on the 28th. Tickets on sale now, priced Â£12.50 for most dates (Â£16.50 for London, Â£10 for Brighton).