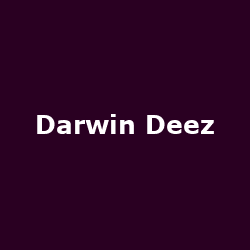 Just a few years ago, perky indie-cum-hip-hop outfit Darwin Deez managed to reach a wider audience by being declared 'cool' by NME (they appeared on the cover and ended up in their year-end Cool List, as you do) and clocking up a near-hit with the single, "Radar Detector". Musically they conjure up The Strokes with a smile, an odd quirky blend of garage, indie, electro and videos that could pass as the visual equivalent of Haribo (check the aforementioned, slightly bonkers "Radar Detector").

Their new video and single isn't any different - taken from the forthcoming new album "Songs for Imaginative People", the corner store in Darwin Deez's"Free Me" is a jerky, bizarre environment of humdrum job, illusions and a whole lot of spilt coffee. The music's naggingly catchy and, guaranteed, you'll be humming this after seeing them live this year.

In February, the band are performing a short UK tour which has almost sold out. So, being nice chaps and all, they've unveiled plans to perform more shows in the sold-out cities, as well as a few newies. In the run-up to their slot at Live at Leeds in May, Darwin Deez will kick off their headlining run in Manchester on 26th April, followed by Nottingham, Norwich, Shepherd's Bush and more until Edinburgh on 5th May.

Darwin Deez are also due to appear at Deer Shed Festival 2013 in Topcliffe, North Yorkshire on 20th July - tickets for that are also on sale from Friday 15th Feb.