Five lucky people will soon be enjoying the romantic voice of the award-winning tenor! 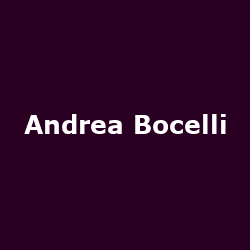 Recently, we ran a competition to win one of five copies of tenor Andrea Bocelli's new CD, "Passione". It's a collection of romantic opera pieces, sung in the usual exquisite way by the award-winning Italian tenor and a top 10 hit in the Album Chart.

Five lucky winners have been drawn out of the Allgigs hat and they are: Pam Young from Grimsby, Marcus Cunningham from Lincoln, John Hill from Manchester, Deborah Dixon from the Scottish Borders and Dan Caldon from Chesterfield.

As well as his unique take on Italian hits such as "Era GiÃ  Tutto Previsto," and "Champagne," or Neapolitan songs like "Anema e Core" and "Mala Femmena", on "Passione" you will find duets with Jennifer Lopez, Nelly Furtado and Edith Piaf. No, that last name isn't an error - producer David Foster has cleverly extracted the original master of Piaf's trademark "La Vie En Rose", added Bocelli into the mix and created a respectful and classic re-reading of the beautiful standard.

As for seeing Bocelli in person, his schedule currently involves two huge arena shows in September, one in Leeds on the 14th and one in Glasgow on the 15th. Both have tickets available now, priced from Â£51.25 - Â£52 upwards - don't miss out!