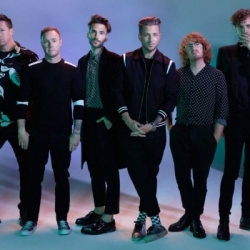 If you remember MySpace and you're a fan of straight-edged pop and rock with no frills but a few thrills, there's a good chance you'll have witnessed the rise and rise of OneRepublic. The beleaguered networking tool helped launch many careers 'back in the day' (i.e. five years ago), before Soundcloud, Bandcamp and even Facebook grabbed the mantle.

While MySpace has been licking its wounds, nursing a diminishing database of departed followers and beginning a resurgence, the likes of OneRepublic have moved on and gained the love and respect of bloggers, pundits and entertainment stations, including MTV. Oh, and you. From their first Timbaland-produced smash-hit "Apologize" to last year's "Feel Again", the band have survived the fickle slap of fame's hand and remained on their own ten feet.

2013 will see OneRepublic return to the UK for a handful of shows throughout the spring, all in support of their forthcoming third long-player "Native", due for release on 26th March, (a single "I Lose Myself" has just been issued). "Native" is the follow-up to their previous Top 30 albums, "Dreaming out Loud" and "Waking Up".

Shepherd's Bush will be the first stop on the tour on 24th April, followed by Manchester, Glasgow, Belfast and finally Dublin on the 29th. Tickets on sale now, priced from £22.50 upwards (25.40 upwards for Ireland). Demand will be pretty big.