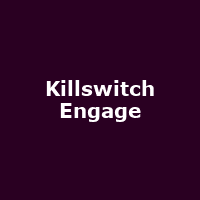 What goes around, comes around, particularly with music. Musicians come and go, some departing for good, others being welcomed back into the fray when situations demand it. Killswitch Engage have had to deal with a recent similar situation when their singer of nine years, Howard Jones, upped sticks and left in 2012. According to his Facebook page, he'd tired of touring and writing and needed a break.

A break. Something that original founding singer Jesse Leach had been having since leaving Killswitch in 2002 - well, a sort of a break. After writing and performing with various rock outfits, including The Empire Shall Fall and Times of Grace, a side-project with KE member Adam Dutkiewicz, he'd clearly caught the bug to re-join his old band-mates again. Resistance was futile - after Jones' departure, Leach was reinstalled and new material worked on. And here it is....

Due for release in April, "Disarm the Descent" is their sixth album and will appear on the Roadrunner label, with Dutkiewicz in the producer's chair and twelve ferocious tracks gathered. The tour should be a blinder.

Killswitch Engage will kick off their UK dates in Manchester on 2nd May, followed by Glasgow on the 3rd, Birmingham, Shepherd's Bush and Cardiff on the 6th. Tickets on sale now, priced at £16 for regionals, £18 for London.