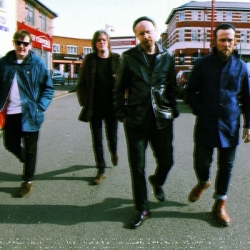 Two popular bands on one bill, tussling for the coveted headline-slot? It's an all-too-rare concept, sadly. But here's a tour that mixes one established chart-busting outfit with an upcoming band who are aiming to be where the other act was over a decade ago. Ladies and gentleman, your co-hosts for this lengthy joint jaunt are The Twang and Cast.

Calling The Twang 'new' is a bit glib - they've been in the game for over ten years but have only recently started to make waves with the likes of NME who have championed the band's output, including their Top 3 debut-album, "Love it When I Feel Like This", issued in 2007. In 2012, they released "10:20" to critical acclaim, resulting in sold-out shows last year.

Rotating the headline slot throughout this tour will be Cast. The Liverpool-based outfit have in them a bona-fide songwriting maestro in John Power and have racked up several hits, including "Fine Time", "Sandstorm", "Walk Away" and "Free Me". Their 2012 album "Troubled Times" continued their knack of crafting memorable guitar anthems, even if the hits have dried up.

You'll need to put May 2013 into your memory-bank to see both bands perform together - the first show is in London on the 9th, followed by Bristol, Birmingham and many more until Liverpool on 25th May. Tickets on sale now, priced from £16 to £18.