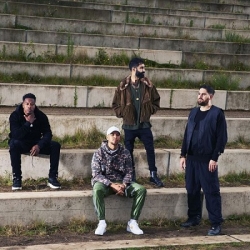 Did you 'Feel the Love?' last year, when London's drum 'n' bass-orientated quartet Rudimental rocked to the top spot? You may well have done - the song became one of the year's biggest hit-singles and became something of an anthem during the rather glum summer.

But the mark of a big single is its reach - both Australia and New Zealand have warmed to the single, with the former using it for an advert, and Europe also coming on board with success in Belgium, Holland and Czech Republic amongst its fans. The follow-up, "Not Giving In", hasn't quite achieved the same success but has, nonetheless, earned them some good gigs. Plan B has already installed them as support on his upcoming tour in February, a slot that is guaranteed to give the Hackney hopefuls more exposure.

Rudimental's hefty urban beats have also caught the attention of potential contributors - Angel Haze is present on "Hell Could Freeze" (they're not kidding with that title), while Radio 1 and fans have been enamoured with their live performances in recent months.

Talking of which, Rudimental will be taking full advantage of their Plan B scenario - they are heading out on their own headlining tour soon after. The first stop is Glasgow on 23rd April, followed by Liverpool, Nottingham and more until London on 2nd May.