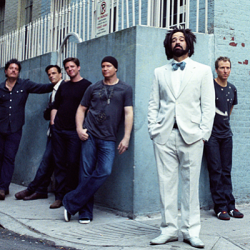 Some twenty years ago, you couldn't surf the airwaves without hearing a perky rock anthem entitled "Mr Jones". In fact, Counting Crows' signature song looked like being their solitary hit until the next decade served up a string of them.

But even with a dearth of hit-songs, the Crows have shifted a lot of albums since 1993 - the debut "August and Everything After", romped to #16 and earned them a gold disc, while the follow-up "Recovering the Satellites", issued in 1996, fared better here and in the US (a #1 over there, no less). Subsequent albums have consistently kept fans happy and, even during a time when music is becoming more machine-like and brief, Counting Crows have continued to strike a chord.

A case in point is their latest studio-set. "Underwater Sunshine (Or What We Did On Our Summer Vacation)" might not have the snappiest of titles but it more than describes the breezy radio-friendly anthems contained within its track-listing. Released in 2012, the album marked a change in label from Geffen to Cooking Vinyl and another notch on the charts' bedpost, proving that covers albums do very well when done right.

To support the album, Counting Crows will be performing a string of UK dates during the spring, starting with Birmingham on 19th April, followed by Bristol, Hammersmith, Manchester and Glasgow. Tickets on sale now, with prices starting from £33.50.

This will be Counting Crows' first UK dates for four years so don't be surprised if they sell out quickly.