Posted: 18th January 2013
The former Dr Feelgood guitarist and songwriter will play a handful of dates in March 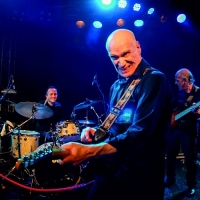 Normally, when a "farewell" tour is announced it is because the band/ artist has chosen to call it a day - with the possibility always that they may make a return later. Unfortunately, that is not the case with this tour. In case you are unaware, Wilko Johnson's manager announced the devastating news last week that Wilko has terminal cancer of the pancreas:

I am very sad to announce that Wilko has recently been diagnosed with terminal cancer of the pancreas. He has chosen not to receive any chemotherapy.
He is currently in good spirits, is not yet suffering any physical effects and can expect to enjoy at least another few months of reasonable health and activity.
He has just set off on a trip to Japan; on his return we plan to complete a new CD, make a short tour of France, then give a series of farewell gigs in the UK. There is also a live DVD in the pipeline, filmed on the last UK tour.

The four UK dates represent an opportunity for Wilko to express his sincere thanks to his fans for all the support he has had over his long career.

Wilko will play KOKO in Camden on 6th March, followed by the Robin 2 in Wolverhampton, Holmfirth's Picturedrome and finally the Glasgow ABC 2 on 9th March. Tickets on sale now, from £17.50.

We sincerely wish Wilko and his family all the best.

It will come as no surprise that the initial four dates announced for London, Wolverhampton, Holmfirth and Glasgow sold very quickly, with just a few remaining now for Glasgow. But, for those who didn't manage to get tickets for London, a new date has been added at KOKO for 10th March. Tickets on sale now.

A brand new date has also just been added for 23rd February at the Wedgewood Rooms in Southsea - tickets available right now.