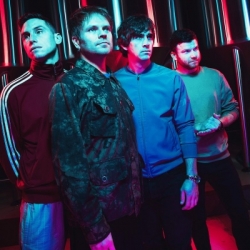 The last time we shone the spotlight on St Albans' king of anthems, Enter Shikari, was to tell you about a headlining tour during the Christmas period.

Presumably the turkeys and nut-roasts haven't taken their toll or sapped the band's energy because, in an unprecedented (and rather exciting) move, Rou and the gang have announced some very intimate dates. And by 'intimate' we don't mean going acoustic, wearing jumpers and going for windy walks - we mean, up close and in your face.

Their next tour, entitled 'Return to Energizer', is all about playing UK and Ireland venues that often either miss out on 'usual' tour-schedules or are located in smaller towns than normal. So, if you can't afford or make it to Download 2013 in the summer, where they've just been added to the bill, you'll want to be heading out to one of these little beauties.

Dorking is the first confirmed stop on 4th April, followed by Frome, Plymouth (the University rarely has gigs of this magnitude), Falmouth and more West Country stops, before some Welsh action, Scotland (Galashiels, get ready), then south to the Midlands and finally over to Ireland. The last show is in Coventry on 5th May and the support for the entire tour is Hacktivist.

Tickets on sale now, with prices starting from £15.

Londoners should seek solace in the fact that Enter Shikari are playing a free show at the 100 Club on 28th January - you'll need to head here for your chance of winning tickets - play.converse.co.uk/2012/11/converse-gigs-at-the-100-club/ - the competition closes on 21st January 2013 at midnight.