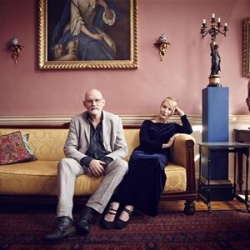 Last year, an entire generation of music fans from around the Isles flocked to London to witness the first concert from Dead Can Dance in several years. It was something special. The world-music inspired duo of Lisa Gerrard and Brendan Perry delivered a hair-tickling experience that bordered on euphoric. Four encores, say no more.

For the uninitiated, the pair formed in the early '80s, moved to the UK from Australia, lived in a council flat in East London, created their first unsettling demo, sent it to leading atmospheric indie 4AD and never looked back (well, perhaps not at first).

From 1984 until 1996, Dead Can Dance issued some of the most profoundly epic music to come out of Britain with tags such as 'gothic', 'mournful', 'filmic' and the classic 'ethereal' often applied to reviews of their albums. Sadly, you might not be able to physically hold their product for much longer, but if you head to their site, you can ogle at the dramatic sleeves that dressed their albums and give them a listen. Where to start? Try "Into the Labyrinth" or the latest set "Anastasis", both highly recommended as outlets for their amazing voices and shimmering arrangements.

In the summer, Dead Can Dance will return to London for another memorable show, this time at the Roundhouse in London. The date to remember is 2nd July. Tickets on sale now, starting at £30.