Posted: 25th March 2013
A quartet of new dates will herald the release of "Sempiternal" next month, tickets on sale now 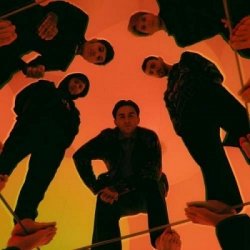 So far for 2013, Bring Me The Horizon have already confirmed several shows across the UK throughout the spring with many already selling out fast. In fact, only Inverness on 1st May has any spaces left, as well as the Reading, Leeds and Belsonic slots they're playing later in the year.

Due to public demand and the imminent issue of their next album (details below), BMTH have added a quartet of warm-up shows due to take place NEXT WEEK!

These exclusive gigs will take place in Edinburgh on 1st April (next Monday), followed by Leeds on the 2nd, Nottingham on the 3rd and Bristol on 4th April.

Tickets for these are priced from £15 and will herald the release of "Sempiternal", also due out on 1st April.

This year, Sheffield's finest metalcore/ whatevercore outfit entered their NINTH year in existence, which almost makes them (whisper it) 'veterans' of the scene. After all, they've lasted longer than most, have issued numerous singles, EPs and albums and are about to enter perhaps the most important phase in their lives - the era of the crossover.

From the very beginning, BMTH have injected an element of humour in their titles whilst still sounding deadly serious. "This Is What the Edge of Your Seat Was Made For" is as perfect an opening gambit as you could wish to christen, while songs such as "Chelsea Smile" and "Diamonds Aren't Forever", as well as their 2010 album "There Is a Hell, Believe Me I've Seen It. There Is a Heaven, Let's Keep It a Secret", have kept compilers busy if nothing else.

That last album managed to battle its way to #13 three years ago - fans are reaching such fever pitch over the forthcoming opus that a #1 is not unlikely.