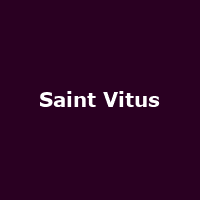 Once upon a time in Los Angeles, some 35 years ago, four young rockers formed a band called Tyrant who didn't exactly fit the name. So much so, that they altered it to Saint Vitus after recording their first early demos and prior to supporting the formidable hardcore legends Black Flag.

It was through Flag member Greg Ginn that they earned their first recording contract, signing to his SST Records imprint and delivering some brutal albums in the process, including their furious self-titled debut in 1984 and the follow-up "Hallow's Victim". With a definite nod to Black Sabbath, Saint Vitus nonetheless out-growled pretty much the entire SST roster and have continued to do the same for decades, despite a split in 1996, a one-off in 2003 and, finally, a reunion proper in 2009. Thank Hell for that.

With the enigmatic 'Wino' Weinrich still heading up his pack of wolves, Saint Vitus unleashed their first album since 1995 with last year's "Lillie: F-65", Weinrich's first on vocals since 1990's "V". At under thirty minutes long, you might get more than an album playback at their next batch of shows, something that fans of the band will be glad to hear.

Saint Vitus will be joined by Mos Generator for a jaunt around the UK, including a headlining slot at a leading metal festival. First stop is Brighton on 11th March, followed by Southampton, Birmingham, Glasgow and Newcastle, before the foursome head down to Hammerfest 2013 to headline the Saturday night. The band will complete their tour in London on the 17th.