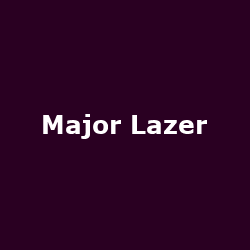 Formed originally as a duo featuring Diplo and Switch, electro-reggaeton producers Major Lazer quickly cemented a place in dance history by recording their first album at the world-famous Tuff Gong studios in Jamaica during 2009.

By breathing in the same space as one Bob Marley, the pair drew heavy reggae and dub influences into their otherwise digital rhetoric, creating a sumptuous dancehall melange that featured contributions from Santigold, VybzKartel (on the party banger "Pon De Floor") and Mr Vegas. "Guns Don't Kill People ..Lazers Do" ranks as a pretty good album-title to boot. Job done.

However, their progress was dramatically derailed in 2011 when Switch switched allegiance and Diplo enlisted Jillionaire and Walshy Fire as replacements. If there was any shadow of a doubt as to where Major Lazer were heading, that doubt was duly erased when the poppier, but still reggae-flavoured single, "Get Free" appeared. With Dirty Projectors' lead-vocalist Amber Coffman sweetly crooning over the bubbly soundtrack, the song acted as the perfect introduction to the next instalment of major Major Lazer activity - and a new album.

Out in February, "Major Lazer Frees the Universe" promises to already be a contender for awards and year-end lists, with another track, "Jah No Partial" (feat Flux Pavilion) out very soon. Not surprisingly, new albums spawn new tours and Diplo and co will be heading to the UK to launch it.

So far, the outfit have confirmed a handful of shows including Sheffield on 1st May, followed by Oxford, Bristol and London (Roundhouse) - all ably supported by American rapper and BBC Sound of 2013 nominee Angel Haze. Tickets on sale now.