Posted: 21st December 2012
The soulful jazz crooner is using crowd-funding platform PledgeMusic to fund the album, with many enticing offers to fans 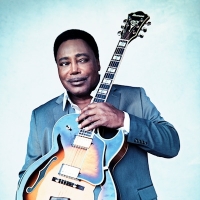 Initially part of the Jack McDuff band in the '60s, George Benson went on to become one of the most enduring figures in jazz (initially), and later jazz/ soul/ fusion. The winner of numerous Grammy's in almost every decade since the 70s (the '90s is missing as is the current decade, but maybe this announcement can rectify that?). George's distinctive guitar sound and voice have graced many a top-selling album and now comes news of an album featuring the music of Nat King Cole, backed by a 42 piece orchestra.

Nat King Cole songs + George Benson + Orchestra = no-brainer. Now, here comes the interesting bit. Eschewing the usual method for creating an album, George has chosen one of the "new wave" for funding projects - the crowd-funding website PledgeMusic. The idea behind PledgeMusic is a great one, and a reasonably simple one: get fans to fund the project, and in return they get an album which they desire, with - potentially - a few goodies on the side. Say, for instance, Thom Yorke decided his next album would feature the songs of Dr Alban performed on a zither. Well, that may not go down too well with XL Records, but someone out there might like the idea and "Pledge" in order to get that album made (I really hope not). The artist sets a target amount, which they can hit by people just plain "Pledging" a certain amount or by offering to sell them signed albums or merchandise. Provided the target is hit by a certain deadline, the "Pledger" should then look forward to the album coming out/ and/ or their goodies being sent in due course. Should the target not be hit by the deadline, the money is refunded to the pledger.

For this album, George is offering copies of signed CDs/ vinyl of the completed album, guitar lessons (via Skype) and signed copies of his signature Ibanez guitar. The minimum pledge is just $10, but for just $18 + shipping (around £15 with shipping) you can get a signed CD. $33 will get you a signed vinyl album, and so on. When I started writing this piece there were 103 signed CDs remaining - there are now 97...

The opportunity to pledge for this project is only open for another 60 days (ends around 19th February 2013). And, to make you feel even better, 5% of the money raised will go towards funding the victims of the recent New York hurricane Sandy, via the Grammy-backed MusiCares charity (www.musicares.org).

You can hear more about this project from George Benson himself in the video, above and check the status of this enticing project here: www.pledgemusic.com/projects/georgebenson