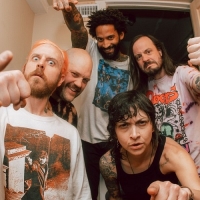 Formed in 2004, the Canadians have wasted no time in delivering a handful of tougher than tough albums such as the debut "Birthing the Giant" and the follow-up "Hail Destroyer". But it was 2010's "Bears, Mayors, Scraps and Bones" that gave Liam Cormier and his crew a leg-up, particularly over here in the UK. It included a cover version of the Beastie Boys' "Sabotage" (also issued on an EP of the same name) and offered a dark insight into the minds of the Bats, as well as some explosive live shows, including a slot at Sonisphere 2011.

Observers expected more of the same with 2012's "Dead Set On Living", but Cancer Bats had other plans. Still very much a 'rock' album, tracks like the singles "Road Sick" and "Bricks and Mortar" have more than an element of Black Flag meets Foo Fighters about them - and that's good.

After supporting Enter Shikari on a recent UK tour, the Bats are heading back for some headlining action. Prepare to be bruised from 8th March when the band touch down in Plymouth, before heading to Cardiff, Birmingham, London, Newcastle and lots more until Brighton on 22nd March.

And if you thought that was all, check out the support - Brutality Will Prevail and Empress will be testing out the Marshall stacks on all dates.