The Wonder Stuff set to Sleigh The UK again in 2013 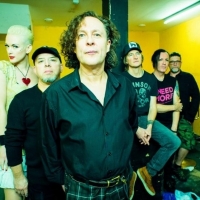 If you have been fortunate to have booked tickets to see The Wonder Stuff on their current skip around the UK, you'll be smug in the knowledge that you did the right thing - you're in for a treat. THREE great bands for the price of one - you don't know you're born. For those that missed last night's (19th Dec) bumper party in Shepherd's Bush, for example, you have another chance for a bite of the cherry. Sleigh the Bells is coming back in 2013 - and you are definitely invited, skate-heads, grebo-stalwarts and newcomers alike.

The Wonder Stuff will once again headline another tour next year, both in April and at Christmas, performing an array of classics from hit-albums "The Eight Legged Groove Machine", "Never Loved Elvis", "Hup" etc., with the support roles for the Xmas 2013 'Sleigh the UK' dates once again being ably fulfilled by mates Pop Will Eat Itself ("Beaver Patrol", "Can U Dig It?", "Get the Girl! Kill the Baddies!" and bonkers-sampling) and Jesus Jones ("International Bright Young Thing", "The Devil You Know", "Info Freako" and keyboard-abuse).

The all-important spring dates start on 4th April 2013 with a show in Reading, followed by more spring stops in Brighton, Holmfirth, Middlesbrough and Preston - these are on sale now, while their Christmas 'Sleigh The UK' 2013 shows kick off in Sheffield on 18th December, followed by Bristol, Shepherd's Bush again and Birmingham (again). These shows will be on sale from 9am on Christmas Eve (Monday).

All three bands are due in Liverpool and Leeds this week - £20 gets you a ticket.