Posted: 19th December 2012
The Watford siblings to play double header at the Scala in April, tickets on sale now 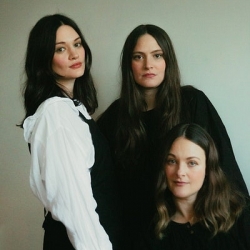 Word-of-mouth is a wonderful thing when applied positively, something The Staves have benefitted from since forming just a few years ago.

Their CV already reads like a script for an interesting documentary - their name is derived from a friend's errant, but inspired, adaptation of their double-barrelled surnames, they recorded with Tom Jones for his 2010 album "Praise and Blame", as well as Fionn Regan's 2011 "100 Acres of Sycamore" and they've supported the likes of The Civil Wars and Bon Iver. Not bad for a trio from the rather forgotten satellite-town of Watford.

The tail-end of 2012 saw the Staveley-Taylors sell out an entire UK tour and release their first proper full-length album in the shape of "Dead and Born and Grown", the follow-up to a handful of EPs and their attention-garnering "Live at Cecil Sharp House" document. Still none-the-wiser? Head to your copy of Mojo Magazine, sever the cover-mount CD from its moorings and slip on the sultry and delectable cover-version of Fleetwood Mac's "Songbird" (part of a Rumours Revisited collection) - good eh?

With all this attention snowballing around them, The Staves might be well-advised that there will be a scramble for their next confirmed shows. London's Scala will be hosting two nights of the girl's harmonious and rootsy rhapsodies on 24th and 25th April 2013.

We have tickets on sale for both shows now, with prices set at a purse-friendly £12.50 (plus fees). Don't wait until they're playing Hyde Park or somewhere where you can't hear or see them, grab these tickets now. They'll be snapped up quick! We'll keep them peeled for any more UK shows as they're announced.