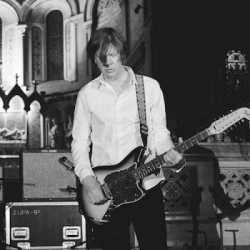 One of these guitarists performing on his own would be rather magical but the two of them together should produce something utterly spell-binding.

Thurston Moore is best known for his beautifully-crafted riffing on Sonic Youth albums, while Michael Chapman has quietly racked-up over thirty albums' worth of neat folk and jazz-influenced string-work that has influenced the likes of Lucinda Williams, Supergrass and, of course, Moore himself. Clearly, the admiration is mutual - both Moore and Chapman will be touring together in 2013, displaying the intricacy and depth of each other's canon of work and providing a combination to be relished.

Michael Chapman released his first few albums on EMI's oddball offshoot imprint Harvest during the late '60s and early '70s, including the hit-album "Fully Qualified Survivor". His playing style is robust, yet beguiling, his vocals a Stateside burr (he's from Leeds, mind you) and his fans many.

Thurston Moore has powered Sonic Youth through some classic material since the band's formation in 1981, including "Bad Moon Rising", "Daydream Nation" and "Dirty". Moore's most recent solo work was 2011's "Demolished Thoughts" and has recently started another project Chelsea Light Moving.

2013 however, belongs to this intriguing partnership's jaunt around the UK, starting with The Purcell Rooms at London's South Bank on 1st February, followed by Norwich, Hebden Bridge, Hull and a few more including Manchester and Bristol until York on the 19th.

We have tickets/links for some of the shows now, with prices starting at an incredibly reasonable £15! Don't miss this.