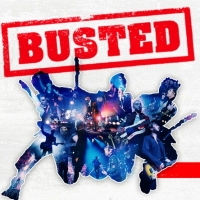 The Garrick Theatre on Charing Cross Road is hosting the World Premiere of Loserville, a new British musical by the award-winning composer/ musician Elliot Davis and Busted/ Son of Dork's James Bourne that takes geek to a whole new rock-pop level.You would never expect that the geeks would have inherited the world. But they did! Loserville gives us the seventies with a cast of characters that are totally recognisable and a score that's entirely contemporary. Perhaps things haven't changed that much after all!

Welcome to Loserville. It's 1971. Michael Dork may be a computer geek but he's invented something that could change the world. He's also discovered girls: a prospect (almost) as exciting as his love of binary.

Holly is the girl: she has looks and brains and wants to be the first woman in space - well, this is 1971! But will she want Michael? Eddie wants a fast ride to the top and doesn't care who gets trampled along the way. Leia just wants Eddie. Michael's friends are all set to change the course of history, fashion and dating - in no particular order, but just as soon as possible, especially the dating bit.

Tickets range from £10 (very limited availability) to £49.50 and we have two tasty deals to offer up! First up we have stalls/ Dress Circle tickets available from just £25.50 instead of £45 for all performances up to Sunday 23rd December. And running in parallel with that for a short while is the chance to buy Grand Circle tickets (usually £35) for just £17.99 for Monday to Friday and Saturday matinee performances until 3rd January 2013.

Click on the Book This Offer button below to check availability.