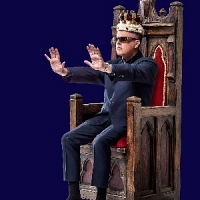 He's just recently turned 50 years old, yet still looks several years younger - if that's what Madness can do to you, pass some over here.

Suggs may have chalked up his half-century (and it has been quite a half-century at that), but the mercurial Madness frontman, songwriter and TV presenter has plenty left in him, including the continued adventures of his live presentation of his memoirs.

The Hastings-born then London based clown-prince of 2-Tone and Our House (the musical) has dabbled with the idea of a spoken-word (with a spot of music) show before, having appeared solo on a short jaunt earlier this year, including Edinburgh and London. The toe in the water is set to become a plunge in the deep-end - Suggs has confirmed an extensive UK stand-up tour for 2013.

And by extensive, we mean it. Over 40 dates from Southsea on 2nd April 2013 to Ipswich on 2nd June, will give audiences an insight into the trials and tribulations, japes and jubilations that have followed (and been created by) Graham McPherson throughout his enviable, but not straightforward, rise from humble Hastings to million-selling singles and albums, a career in TV and radio and now, My Life Story in Words and Music. It's an engaging, humourous, sometimes reflective tale of highs and lows - and, of course, total Madness.

Other calling points include the likes of Chatham, Hayes, Truro, Telford, Monmouth, Corby, Harrogate and Preston - pretty far-reaching, and certainly (ahem) one step beyond your typical large-venue show, although Scotland and Ireland are yet to be included (watch this space).

Tickets for all shows are on sale via us now, priced from around £23.50 to £25 depending on venue.