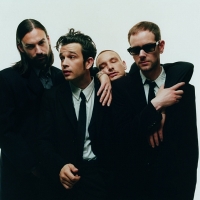 Following the release of The 1975's two acclaimed EPs 'Facedown' and 'Sex' and a sold-out debut headline tour, the Manchester outfit have announced 24 dates in the new year.

Currently holed-up in a studio working on new material, The 1975's debut album will be co-produced by the band and the award-winning Mike Crossey (Arctic Monkeys, Foals). With these two EPs already under their belts, the full-length promises to be an affair of enormous proportions.

They will begin their lengthy tour ahead of their appearance at 2013's SXSW on 22nd January in Newcastle, followed by more dates in major towns such as York, Leeds, Edinburgh, Glasgow, Sheffield, Bristol, Manchester and more, until closing date on 18th February at London's Borderline. Tickets for all shows go on sale from 9am Friday 14th December.

And to celebrate, Romanian producer LIAR has remixed the title track of The 1975's 'Sex' EP, which is FREE to download here - www.soundcloud.com/the1975/the-1975-sex-liar-remix