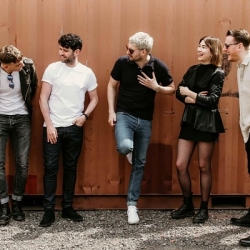 In just five short years, Manchester's impish indie-rockers The Courteeners have blasted their way into notoriety with good old honest guitar pop and a pair of albums that have been previous unlikely bedfellows with the likes of Lady Gaga and Muse.

Unlikely perhaps because the Middleton quartet aren't your average stadium-filling band - they're followed by a large partisan support instead. When not headlining, the band have 'played away' as warm-ups for Stereophonics, fan Morrissey and Arctic Monkeys (at Reading Festival 2009). And it's always handy when the music-press include your album in their end of year round-ups - both 2007's debut "St Judes" and "Falcon" from two years ago featured in 'best-of charts' at the end of their relevant years.

Perhaps 2013 will continue the trend for critical adulation and a Top 5 Album Chart placing with album number three. "ANNA" will be released on 4th February and will be preceded by a single called "Lose Control", giving fans plenty of time to learn the new songs for their next lengthy hop around the UK.

Nottingham will be the first stop on the tour on 21st February, followed by Leeds, Birmingham, Liverpool and many more through Scotland, right down to the last show at the Brixton O2 Academy on 16th March.

We will have tickets to all shows from 9am on Friday 14th December, priced from around £19.50 upwards.