OMD get switched on for 2013 English Electric UK tour 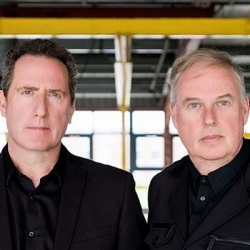 From the band's early days of sharing a stage with a tape-machine called Winston to 2010's "History of Modern" album, it's a fascinating career that has seen them bounce from being edgy synth-geeks on Factory Records ("Electricity", "Almost") to romantic pop contenders with songs such as "Enola Gay", "Souvenir", "Joan of Arc" (and its "Maid of Orleans" cousin), "So in Love" and the recent "Sister Marie Says".

Once unfashionable sweater-adorned electro-pop nerds (not so uncool for the similar Hot Chip, you'll notice) and now serious, older and wiser blokes, OMD can still cut it when it comes to melodies and songwriting - something the key partnership of McCluskey and Paul Humphries intend to prove with the release of their next album.

"English Electric" is set to appear early next year with a 2013 UK tour already confirmed to support it. Their travels begin in Margate on 28th April, followed by stops in Birmingham, Nottingham, London and many more until Liverpool on 14th May. Prices are £32.50 - £33.50 depending on venue and go on sale via us at 9am on Friday 14th December.