Posted: 5th December 2012
The popular comedian, writer and activist continues his heartfelt story about his father's love of opera, tickets on sale now 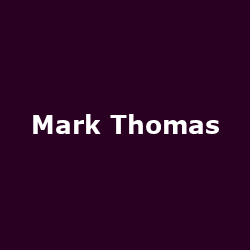 Let's be honest, Mark Thomas isn't your average comedy performer, nor is he average. Performing since the mid '80s, the South Londoner has not only 'done stand-up', he's performed at benefit-shows, appeared on TV and radio sparingly and acted as a compere. Nothing hugely unusual about all of that, you may concur, but Thomas has become increasingly more political, more in tune with the world's wrong-doings - in short, he's become an activist. Shock. Horror. Awe. Some.

If it wasn't for the Mark Thomases of this world, we'd be none the wiser about drug-dumping, arms-dealing, chemical warfare, national debts in some of the poorest countries in the world and heinous behaviour by corporate multi-nationals and human rights. He's been in the occasional spot of bother for protesting (he formed McDemos in 2007) and is probably a bit more sussed than people should give him credit for. Of course, walking along the West Bank and calling the resulting show "Extreme Rambling", exudes a certain amount of humour and insanity.

For Mark's most recent and most personal work, he's been working in opera for the sake of his father, a self-employed builder living in a Bournemouth bungalow with a degenerative disease. He also loves opera and along with the Royal Opera House, who commissioned it, Bravo Figaro tells his touching story as seen through the eyes of his son. Putting on an opera is hard enough - presenting an opera in the confines of a bungalow is a whole different kettle of Carmen.

Mark Thomas will be touring Bravo Figaro next year, starting with a show in London on 29th January 2013, followed by performances in Liverpool, Bristol (three), Salisbury, Ludlow and many more until Finchley's Arts Depot on 28th February. Tickets are on sale now, priced at around £15.

Later in the spring, Thomas will be appearing at Penzance's nearby Minack Theatre on 17th May, for a very special performance right next to the sea and under the elements - tickets for this show cost £17.50.